The husband is pretty car mad, I’d say he’s had about 30 in the last 9 years. I usually  can’t and don’t distinguish between them but just occasionally he’ll buy something that I will happily say is mine too…

We owned a beetle a few years ago, she was called cabbage, but she was a bit tatty and problematic so we swapped her for something else.. Gus however, has been lovingly restored and looked after an still has enough things to do and tinker with to keep the Mr happy. I think he’s gorgeous, I just need to get used to those funny old pedals now! Definitely in need of a crocheted blanket for the back bench though? What do you think? 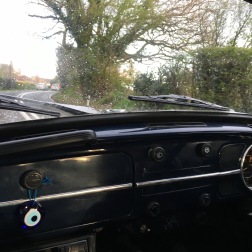 Little bit of a trivia for you, in France it was known as the Coccinelle which means ladybird, but in the Herbie film Herbie’s french name was Choupette! Le petit choupette perhaps?

One thought on “Bluebell Woods and Beetles”